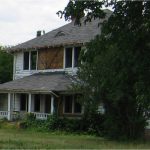 [2011 UPDATE: For more detail on this topic, see the following 2011 book: Housing Codes for Repair and Maintenance: Using the General Police Power and Minimum Housing Statutes to Prevent Dwelling Deterioration]

North Carolina experienced a record number of foreclosures in 2008. Then, in 2009, even more. January 2010 was worse than January 2009 (the latest foreclosure data can be viewed here). North Carolina communities are seeing unprecedented numbers of vacant and abandoned homes. When these dwellings deteriorate to the point that they become “unfit for human habitation,” cities and counties possess authority under the Minimum Housing Standards statutes (G.S. 160A-441 et seq.) to order owners to repair or demolish the unfit structures. Recent amendments contained in Session Law 2009-279 gave a boost to local government authority under the statutes, essentially shifting some discretion from dwelling owners to local governments. This post explains that shift.

Before getting to the amendments, let’s review the basic operation of the Minimum Housing Standards statutes. As a threshold matter, the statutes contain enabling authority only; a city or county governing board must first enact its own minimum housing ordinance (MHO) using the statutorily-prescribed language. Once a MHO is adopted, the local board must appoint a public officer to exercise the powers granted by statute. The powers consist primarily of holding hearings and issuing orders that require owners to rectify a dwelling’s unfit state. If an owner fails to comply with a MHO order, the statute authorizes the local government to effectuate the order, with any costs becoming a high-priority lien on the property.

There are two broad categories of MHO orders. One category applies to dwellings that are so deteriorated that they cannot be repaired at a reasonable cost (each local government defines “reasonable cost” within its local MHO). For dwellings in this category, the public officer must, by statute, order the owner to “remove or demolish” the unfit structure.

For purposes of this post, we’re more interested in the second category of orders, which was modified by Session Law 2009-279, effective October 1, 2009. This second category pertains to dwellings which, although unfit for human habitation, are less deteriorated and can still be repaired at a reasonable cost.

Under prior law, the order to be issued to owners of these unfit—but still reparable at reasonable cost—dwellings was “to repair, alter or improve or to vacate and close” the unfit structures. Notice that, by its terms, this order provided owners with a choice: either repair your dwelling or board it up. Not surprisingly, many owners opted to board up their structures rather than spend money on repair, sometimes evicting tenants in the process and leaving vacant and blighted structures behind. The 2009 amendments took that choice out of owners’ hands and essentially gave it to local governments.

Does this mean that dwellings cannot be indefinitely vacated and closed any longer? No. If an owner fails to comply with a MHO repair order, the local government makes a choice. It may choose either to make the repairs itself, with the costs becoming a high-priority lien on the property, or it can vacate and close the dwelling indefinitely.

With this shift in authority, MHOs could potentially play an important role in preserving dwellings that are deteriorating in the wake of foreclosure. Taken together with other powers, MHOs could serve as one component of a comprehensive program for regulating vacant and abandoned dwellings. I’ll save that discussion for a future post, but if you want to read ahead, the unabridged legal analysis can be found in my law review article on vacant property registration programs.

https://ced.sog.unc.edu/2010/02/foreclosures-abandoned-homes-and-minimum-housing-codes/
Copyright © 2009 to Present School of Government at the University of North Carolina.