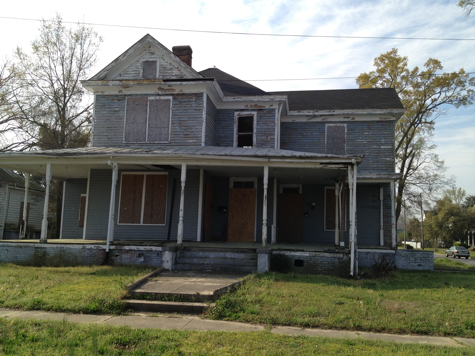 A few blocks from downtown in the town’s historic district sit two houses built in the early twentieth century: the Hare House and the Tortoise House. The houses retain their historic elements and contribute to the architectural character of the neighborhood. While the houses have seen better days, they are not falling in.  At least not yet.  The houses are on the path toward demolition, just at different speeds. For the Hare House, the owner wants to tear the thing down. Now.  As for the Tortoise House, the years without maintenance are starting to show.  The slow process of demolition by neglect has begun, and without some maintenance soon it will be beyond repair.

This blog explores two options under the authority for local historic preservation: (1) delayed certificates of appropriateness for demolition and (2) ordinances to address demolition by neglect.

This blog focuses on the local government authority under the historic preservation statutes.  But the broader topic topic—maintenance of older structures—touches on a range of issues and local government authorities including minimum housing, unsafe structures, and condemnation orders.  Tyler Mulligan has written widely on this topic, including his book on Housing Codes for Repair and Maintenance and his law review article on a Comprehensive Program for Regulating Vacant or Abandoned Dwellings.  Richard Ducker addressed the overlap between preservation authority and code enforcement in his blog on Demolition and Code Enforcement Involving Historic Districts and Landmarks.

As outlined in the state laws for local historic preservation (NCGS § 160A-400.9), once a local government establishes an historic district or landmark, a property owner must obtain approval from the preservation commission (a certificate of appropriateness or COA) to erect, alter, restore, move, or demolish a building or structure.  So, if the owner of the Hare House described above wants to tear down her house in the historic district, she must first seek a certificate of appropriateness from the preservation commission.

The preservation laws also provide specific limits for certificates of appropriateness concerning demolition (NCGS § 160A-400.14).  Generally, a COA for demolition may be delayed but cannot be denied.  The effective date of a COA for demolition may be delayed for up to one year from the date of approval in order to explore opportunities for saving the structure.  During the delay period the preservation commission “shall negotiate with the owner and with any other parties in an effort to find a means of preserving the building or site.”

The maximum period of delay is 365 days, but that must be reduced in certain circumstances.  The delay period must be reduced if the preservation commission finds that the delay would cause the owner to “suffer extreme hardship or be permanently deprived of all beneficial use of or return from such property by virtue of the delay.”  Additionally, the preservation commission must waive all or part of the delay period if it “finds that a building or site within a district has no special significance or value toward maintaining the character of the district.”

For properties that have been proposed for designation but not yet been designated, the preservation commission may delay demolition for up to 180 days or until the governing board takes action on the designation, whichever comes first.

A preservation commission may deny a COA for demolition for properties determined by the State Historic Preservation Officer as having statewide significance under the criteria of the National Register of Historic Places.  A commission cannot deny such a COA, however, where it finds that that “the owner would suffer extreme hardship or be permanently deprived of all beneficial use or return by virtue of the denial.”

And what about the Tortoise House?  Can the town speed up maintenance to avoid the slow demolition? Yes. Under NCGS § 160A-400.14 a municipality may adopt an ordinance “to prevent the demolition by neglect of any designated landmark or any building or structure within an established historic district.” Such an ordinance can place an affirmative responsibility upon the owner for basic maintenance of the historic structure and threaten enforcement penalties to ensure such maintenance.

The statute gives little guidance about the standards or procedures for such an ordinance; it states merely that “[s]uch ordinance shall provide appropriate safeguards to protect property owners from undue economic hardship.”  Even so, there are a few essential elements for this type of ordinance—elements that are required for due process and generally included in practice.  These include:

Many communities across North Carolina have adopted ordinances to prevent demolition by neglect. Hendersonville (Code of Ordinances Ch. 28, Art. VI), Hillsborough (Unified Development Ordinance § 8.6), and Washington (Code of Ordinances § 40-387), for example, include each of the elements noted above to protect due process.  Dan Becker, former Executive Director for the Raleigh Historic Districts Commission and now with Heritage Arts in Raleigh, has written about “Establishing a Demolition by Neglect Ordinance” for the National Alliance of Preservation Commissions.

It is worth noting that for select municipalities the demolition by neglect ordinance may be applied to structures outside of the historic district but within the central business district. This provision, though, is limited only to a municipality: (i) with a population greater than 100,000, (ii) that has designated historic districts and downtown as Urban Progress Zones, (iii) is recognized as a Certified Local Government, (iv) and is in a county that is not a Certified Local Government (NCGS § 160A-400.15).

Getting back to the Hare House and the Tortoise House, what can the town do?

https://ced.sog.unc.edu/2016/11/the-tortoise-the-hare-and-demolition-in-historic-districts/
Copyright © 2009 to Present School of Government at the University of North Carolina.
Comments are closed.