Begun in 1982, the Small Business and Innovation Research (SBIR) grant program provides funding to small businesses throughout the country. The purpose of the program is to leverage the innovation capacity of small businesses and encourage the commercialization of private sector research and development. In North Carolina, small businesses across the state have successfully utilized available funding, receiving nearly $850 million over the life of the program.

Rather than through a consolidated office, SBIR funds are awarded through individual federal agencies. As established under the Small Business Innovation Development Act of 1982, any agency with external research and development obligations of more than $100,000 must allocate a portion of available funding to the SBIR program. According to the Government Accountability Office, eleven agencies participated in the program in fiscal year 2017, and each was required to allocate at least 3.2 percent of available funding to SBIR. In that year alone, these agencies made 4,800 awards totaling nearly $2.3 billion.

In order to qualify for SBIR funding, applicant businesses must be private, for-profit entities with physical locations in the United States. Additionally, its legal and ownership structure must meet certain eligibility requirements, and it must employee less than 500 individuals. Typically, these businesses are small startups focusing on the commercialization of new patents and technology.

Each year, the federal Small Business Association (SBA) provides an updated database of all awards made throughout the program’s history. Using this information to look more closely at awards made to businesses in North Carolina, two key patterns emerge.

In 2017, eight agencies made 117 awards, totaling more than $51 million in obligations, to businesses in North Carolina. Across the state, 26 municipalities are represented, with Durham and Research Triangle Park accounting for more than $22 million of the total awards. Meanwhile, other Triangle communities, such as Raleigh, Chapel Hill, and Cary accounted for an additional $17.5 million. In total, the Triangle received more than 76 percent of all North Carolina awards made in 2017.

Communities in and around the Charlotte metro accounted for nearly $7.2 million, while Triad communities were awarded nearly $2.9 million.

Over time, as North Carolina has increased its overall funding awards, this geographic pattern has remained consistent. A clear divide between urban and rural areas exists, while a particular dominance is seen in and around the Research Triangle. 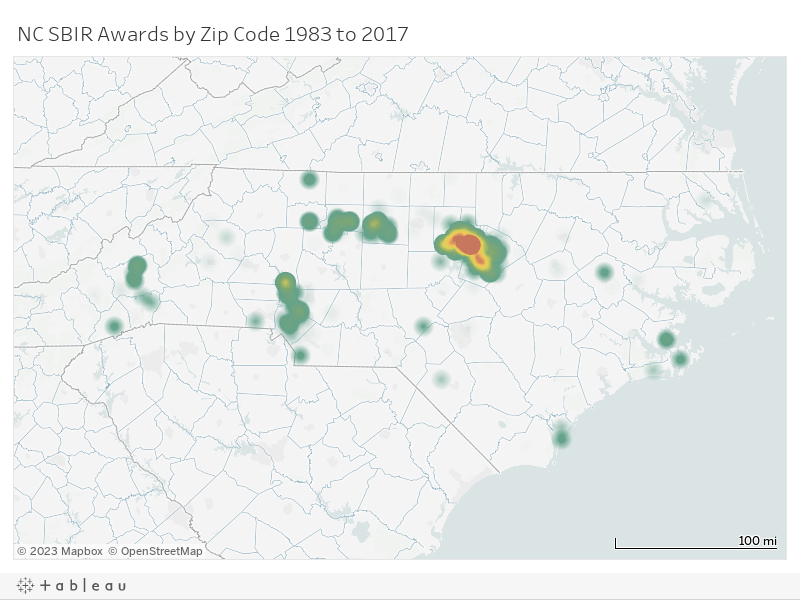 Out of the 117 total awards in 2017, 12 were granted to businesses owned by socially and economically disadvantaged individuals. In terms of total dollars, these awards accounted for less than 10%, or $5 million. As defined by the SBA, this classification includes individuals of color, including Black, Asian, and Native American individuals, as well as those of Hispanic ethnicity.

At the same time, only eight awards totaling $2.5 million were made to women-owned businesses in 2017. No awards were made to businesses owned by female-identifying and socially and economically disadvantaged individuals.

From 2006 to 2017, these trends have remained relatively consistent. The data suggest that out of 1,238 total awards, 128 have been made to businesses owned by socially and economically disadvantaged individuals. At the same time, 291 were made to women-owned businesses, and 92 were made to businesses owned by individuals that are both female-identifying and socially and economically disadvantaged.

Overall, SBIR grant funding serves as a valuable resource in promoting small business innovation. Since the program’s founding, North Carolina has been awarded nearly $850 million in federal obligations. However, these awards have concentrated around urban and already innovative areas of the state, and they have primarily benefited companies owned by white men.

By raising awareness of this program in their communities, local governments and economic development practitioners across the state increase their potential to capture SBIR funding. In doing so, the program’s ability to leverage innovation and spark economic growth might be distributed in a more equitable manner.

For more information on available funding opportunities, a list of open solicitations can be found on the program’s website.

For more assistance in applying for funding, please consult the North Carolina Department of Commerce. The One North Carolina Small Business Fund provides reimbursement of application expenses for qualifying businesses and further provides matching grant funds for some awards.

https://ced.sog.unc.edu/2019/01/a-review-of-sbir-grant-funding-in-north-carolina/
Copyright © 2009 to Present School of Government at the University of North Carolina.
Comments are closed.