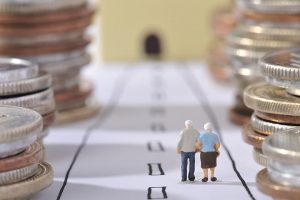 The Joint Center for Housing Studies (JCHS) at Harvard University recently published the “Housing America’s Older Adults” report, an overview of the changing dynamics and needs of the nation’s aging population.  The report highlights the need to address the evolving housing needs of the large and aging baby boomer generation. This post will discuss some of the analysis completed in the report as well as look closer at how North Carolina’s elderly population’s housing needs are changing, with a particular focus on affordability.

According to the Harvard report, the number of adults age 65-74 will almost double between 2010 and 2030 with one in five people projected to be over 65 in 2030.  This wave of aging has also shown up when looking at areas where concentrations of older people have begun to cluster. In concert with this new report, JCHS created a series of interactive maps including one showing the shift in counties with significant populations over the age of 50.  In North Carolina in 1990, only two counties comprised over 40 percent of the population over the age of 50.  In 2010, that number jumped to 27 counties.  This significant shift in our state and nation has a significant impact on the housing needs of this demographic. 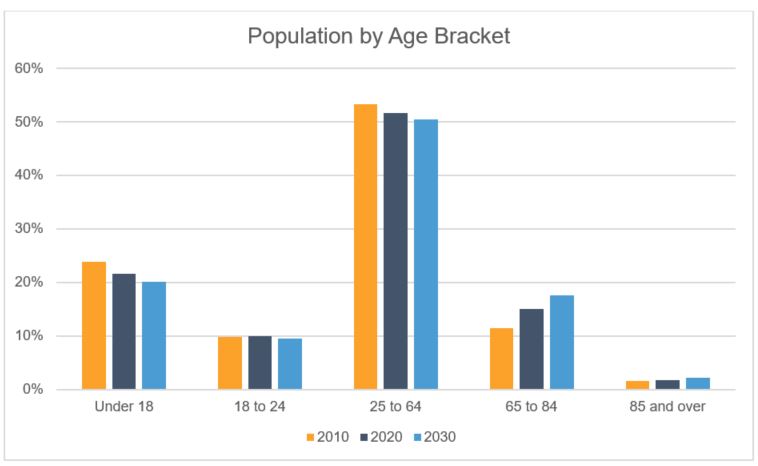 According the JCHS report, the majority of elderly adults (68-76% depending on the age bracket) live in single-family homes with the remainder living in multifamily housing.  Somewhat unsurprisingly, as people age their likelihood of living with other family members increases, with 11 million older adults living in multigenerational households.  As people pass 80, the dynamic shifts from younger generations living in older generations’ homes to older generations living in younger generations’ homes.  Additionally, the likelihood of older adults living alone spikes after age 65, often brought on by partners dying.  Surprisingly, there is a drop at age 65 in adults living with other family instead of an increase to correspond with the spike in living alone. Source: ACS: 5-year estimates

Currently, people age 65 and over have a homeownership rate of 79 percent, which represents a slight decline in pre-recession rates of around 80 percent. The trend also tends to dip after age 80, when renter-ship increases as some adults shift toward senior-type living arrangements.  As this population liquidates their housing equity, large stores of wealth are capitalized increasing cash holdings for these populations.

Currently, older renters under the age of 80 tend to be lower income households. Low-to-middle income elderly households are, according to an AARP report, largely reliant on Social Security for their income.  For households that rent, this relatively fixed income is not keeping up with rising housing costs in North Carolina.  According to data from the Department of Housing and Urban Development’s (HUD) Comprehensive Housing Affordability Strategy (CHAS) , the number of renters over the age of 62 that are cost burdened (spending over 30 percent of income on housing) has grown significantly from 2009 to 2015, as shown in the figure below.  The graph describes renters at various levels of income below the area median income (AMI). 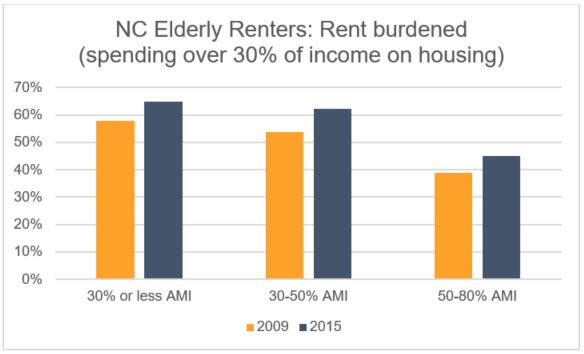 The intersection of affordable housing and housing for elderly is only going to become more relevant over the next decade as the baby boomers age, their housing needs become more specific, and the relative cost of living increases.  Housing advocates have been drawing attention to the growing need through quality research, but policy and development will need to maintain focus on this important shift in the housing market.

Bobby Funk is a Master’s candidate at UNC-Chapel Hill’s Department of City and Regional Planning and a Community Revitalization Fellow with the Development Finance Initiative.

https://ced.sog.unc.edu/2019/01/trends-in-housing-for-an-aging-population/
Copyright © 2009 to Present School of Government at the University of North Carolina.
Comments are closed.