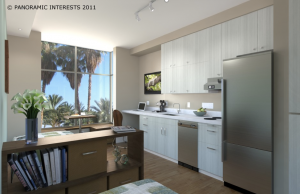 Overview Part 1 of this two-part series discussed what micro-units are, where they are found, and the problem they seek to address. In Part 2 of this series, this blog will explore three criticisms of micro-units and provide a case for why micro-units should still be considered a viable housing option.

Criticism 1: Micro-units may lend themselves to overcrowding and health concerns

Although micro-units are growing in popularity as one way to address housing needs in cities across the U.S., not everyone is convinced that smaller units are a good idea. Micro-units are not the first time our country has offered small spaces as residences, and critics of micro-units point to the potential for overcrowding and health risks that were prevalent in tenement housing in the early 20th century (The Atlantic, Observer). However, three factors present today help to mitigate these risks for micro-units: household composition, demand demographic, and micro-unit design.

Today, household sizes are much smaller than they were in the late 19th and early 20th centuries. In 1850, the average household size was 6.16 people, compared to 3.07 by 2000 (Salcedo et al., 2009). Further, the US Census Bureau estimates that single-person households now account for 27.9 percent of the U.S. population (Table 1).

In addition, the Urban Land Institute (ULI) found that single adults (mostly male), under age 34 living with roommates and earning less than $40,000 (ULI, 2014) are most likely to choose micro-units.

Criticism 2: Micro-units should not be considered Naturally Occurring Affordable Housing

Naturally Occurring Affordable Housing (NOAH) “refers to residential rental properties that maintain low rents without federal subsidy” (NOAH Impact Fund). Supporters of micro-units thus champion micro-units as a form of NOAH due to their ability to lease at approximately 25 to 30 percent lower than conventional units without subsidy (ULI, 2014). Based on the definition of NOAH, micro-units should be considered a form of NOAH.

However, critics argue that although micro-units offer lower rents, they may actually “exacerbate high rents … because of comparatively high rates per square foot” (Infranca 2014, 61). At the time of ULI’s report, micro-units in the South received a 40 percent premium per square foot over mid-sized units and a 56 percent premium per square foot over larger units (ULI, 2014). Critics also point to the issue of affordability of micro-units over the long-term since they are not federally subsidized. However, though a legitimate concern, the issue of maintaining affordability over time is not an issue unique to micro-units but can also be a threat for traditional NOAH properties as well.

Typically identified as one- and two-star properties in CoStar’s Building Rating System, NOAH properties generally need considerable investment to bring them to the place to command market rents (NAAHL & ULI, 2016). However, if a NOAH property were upgraded, because there is no federal subsidy involved, the property would likely increase its rents and become unaffordable as well.

Criticism 3: Micro-Units only work in markets that are supply constrained

Part 1 of this series introduced Worcester, Massachusetts, a mid-sized city of 180,000 that built a complex of 55 “micro-lofts” on their Main Street. In this case, the Massachusetts College of Pharmacy and Health Sciences played a key role, leasing nearly half of the units to serve their graduate student and professional population. In Chattanooga, TN, another mid-sized city, a mixed-use development in an up-and-coming part of town called Passenger Flats converted 95 hotel rooms into tiny apartments (350-square foot).

In these examples, two factors played a critical role in the success of the micro-unit developments. First is that the developments were in an urban setting (ULI, 2014). The second is that there was a local demand driver, whether it was a College or a mixed-use development in an up-and-coming area. Some developers have even hypothesized that micro-units can be “equally as viable in suburban and lower-density locations as it would be in an expensive urban location” (ULI 2014, 30).

Overall, this blog explored three criticisms of micro-units in the U.S. and offered a case for why micro-units should still be considered a viable housing option. When considering the larger issue of housing affordability, micro-units will still only be a drop in the bucket compared to the affordable housing needs in most areas; thus, they should be utilized as one way to increase housing stock.

Sonyia Turner is pursuing her Masters in City and Regional Planning from UNC-Chapel Hill and is specializing in housing and community development. Sonyia is a Fellow with the Development Finance Initiative (DFI).

https://ced.sog.unc.edu/2019/02/exploring-micro-units-part-2/
Copyright © 2009 to Present School of Government at the University of North Carolina.
Comments are closed.