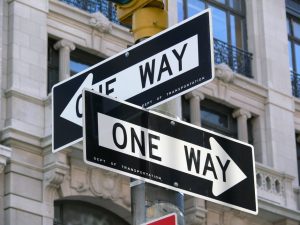 In recent years, cities across the country have chosen to convert their one-way street networks into traditional two-way streets. This blog post will explore the roots of this widespread planning trend, its potential impacts on city streetscapes, as well as some common counterarguments to this movement.

The History of One-Way Streets

An original movement from two-way traffic patterns towards one-way streets stemmed from a unique combination of political considerations and urban spatial patterns. In the latter half of the 20th century, many streets were converted to one-way with the intention of improving the street network’s efficiency by increasing vehicle speeds. This in turn would allow vehicles to travel out of downtown areas more quickly. The effort was reflective of planning trends at the time. In the midst of the Cold War, civil defense planners designed one-way street networks to facilitate quick evacuations in case of a nuclear threat. Additionally, transportation planning prioritized connecting central city employment with the suburban living, which could be achieved more quickly with a one-way arterial street network.

In more recent years, cities have begun the process of converting their one-way thoroughfares back into two-way streets, compelled by a growing body of research to suggest that there are economic development, safety, and efficiency benefits to be realized by doing so. Conversions began as early as the early 1990’s, but the trend gained momentum by the 2000s with larger cities (including Berkeley, CA; Charleston, SC; Dallas, TX; Des Moines, IA; Denver, CO; Louisville, KY; and Minneapolis, MN) opting to make the conversions in their downtown commercial corridors. This trend is part of a larger effort by cities to reinvent their downtowns to make them livable and attractive.

A significant driver of the conversions are the promises of revitalized downtown commercial corridors. There is evidence to suggest that conversion of one-way streets to two-way streets results in increased pedestrian and bicycle traffic (a result of safer streets, further explored below), and slower speeds of vehicular traffic that cause drivers to pay more attention to the businesses that they pass. This in turn results in a greater number of potential patrons passing downtown shops and businesses, which can boost business revenue, increase property values, and strengthen a city’s tax base. The 2011 conversion of two multi-lane one-way streets in Louisville, Kentucky resulted in significant increases in property values on the converted streets. Similarly, business owners in the First Street corridor of Vancouver, Washington saw a significant increase in both vehicular and pedestrian pass-by traffic on their street after the street’s conversion to a two-way pattern.

Two-way street conversions are also attractive as a method of improving the safety of downtown street networks. Research suggests that conversions can result in slower vehicular traffic and fewer collisions, which together create a safer environment for cycling and walking. One study found that average speeds on one-way streets were double the speed of two-way streets in the same neighborhood. Though two-way streets invite more conflicting maneuvers (such as left turns that cross traffic), drivers on one-way streets tend to be less attentive to their surroundings, and thus more at-risk for collisions.

There is also evidence to suggest that conversions to two-way streets can decrease crime. Louisville, Kentucky saw a 23% decline in crime and a 42% reduction in robberies on streets converted from one-way to two-way patterns, perhaps a result of greater attention to the street by a new population of cyclists and pedestrians, as well as by drivers now moving at a slower speed.

However, two-way street configurations also require more left hand turn maneuvers that cross traffic, which slows the overall flow of vehicles through an intersection. Given this fact, and the higher speed of traffic achieved on one-way streets, two-way streets appear to have lower maximum network capacity. Thus, transportation planners and engineers will need to weigh the priorities of network speed and capacity against the priorities of trip efficiency, vehicle miles traveled and emissions generated.

While there is significant variability in the costs of conversions of one-way streets to two-way, advocates of two-way street conversion claim that conversion costs are offset by increases in the tax base as a result of growing business revenue and increased property value. Additionally, advocates note that the cost of conversion can often be less expensive and more effective than standalone revitalization projects. For example, Vancouver, Washington paid approximately $612,000 to convert three of their streets (extending approximately 10 blocks) to two-way roads. This effort came on the heels of many years and millions of dollars spent towards revitalization projects, that even when successful did not extend benefits to the street itself. However, within weeks of conversion to a two-way street, the business community had already noticed significantly more pedestrian and vehicular traffic on their street, a promising start towards generating more business revenue.

Alongside its champions, there are also critics of the movement. Many traffic engineers and academics criticize the reduction in the total network capacity as a result of the slower speeds and more difficult maneuvers required. As briefly noted above, the Thoreau Institute claims that the slower speeds of traffic on two-way streets lead to diminished network efficiency that creates greater environmental impacts. Some owners of businesses on converted streets claim that the transitions caused disruptions for their businesses. Specifically, they note that patrons must adjust to new street patterns, and they describe new difficulty with patron drop-offs and truck loading and unloading at storefronts, as the two-way traffic pattern limits “upstream” cars from moving around stopped vehicles. Some opponents fear that the reduction in vehicle speed could create more congestion, causing people to avoid downtowns altogether. Finally, there have been complaints from fire departments, who note that it takes them longer to reach their destination on the slower-moving two-way streets.

In recent years, several North Carolina cities have begun converting their one-way streets to two-way, including Raleigh, Winston-Salem, Greensboro, Charlotte, and Durham, which has been working on plans to open its downtown “loop” to two-way traffic for several years. Advocates say that conversion of the loop – a major multi-segment thoroughfare that channels traffic through downtown Durham – could support pedestrians, cyclists, and transit users, create a better environment for downtown businesses, and improve the connection between downtown Durham and its adjacent neighborhoods. To fund the conversion, the City of Durham has applied for a $12 million US Department of Transportation TIGER Grant.

Though the debate on two-way versus one-way street configuration is ongoing, evidence suggests that two-way street conversions can offer municipalities a pathway to revitalization of downtown commercial cores and a means of achieving the gains in safety and efficiency that make that revitalization possible.

Amelie Bailey is a Master’s candidate in the UNC-Chapel Hill Department of City and Regional Planning and a Community Revitalization Fellow with Development Finance Initiative.

https://ced.sog.unc.edu/2018/12/the-state-of-the-debate-two-way-street-conversion/
Copyright © 2009 to Present School of Government at the University of North Carolina.
Comments are closed.