The Brookings Institute recently published an article detailing some of the benefits and drawbacks of the planning practice known as upzoning: the rezoning of a parcel of land from a lower allowable density to a higher one. One of the primary purposes of upzoning is increasing density, both of residential and commercial property. This post deals primarily with the practice of residential upzoning.

The practice of zoning has been increasingly debated in public forums due to its impact on racial and socionomic equity. The Brookings article briefly details the history of exclusionary zoning, where single family homes were built on large lots in expensive areas, often pricing-out potential residents of certain demographic groups. Upzoning would seem to be a cure for the long-term impacts of these exclusionary zoning practices, and the White House’s new infrastructure plan includes economic incentives to promote changes in zoning codes to allow for more high-density development. However, questions remain about the impact of upzoning on gentrification and increased housing prices, including the Brookings finding that upzoning in New York “is positively and significantly associated with the odds of a census tract becoming whiter”. However, many of the academic conclusions on the impacts of upzoning must be caveated by the fact that they are based almost entirely on case studies in large, urban municipalities, with some of the most prominent articles in the field using Chicago, Portland, and Whitewater, Wisconsin as their areas of study. In general, however, the key conclusion from the literature is more-or-less consistent: upzoning is correlated to increased property values.

In order to find out whether the findings in the articles mentioned above are generalizable to the American Southeast, the impacts of upzoning on property values were studied in two municipalities in North Carolina: Cary and Morrisville. Both municipalities are wealthier, suburban, non-college towns located in the heart of the triangle region. Time-series data from 2013-2020 was gathered from Wake County itself (in North Carolina, counties are primarily responsible for property value assessments, and while state law mandates the county evaluate a minimum of every eight years, Wake County evaluates every four years. The study therefore encompassed three reevaluation periods: 2012, 2016, and 2020). The study compared the changes in average price-per-square-foot of residences bordering upzoning cases from 2012 and 2013 against their neighbors, whose property lines did not directly border those of an upzoning case. In total, the study encompassed 361 properties surrounding upzoning cases and 310 of their randomly-selected neighbors.

The study included numerous control variables to ensure proximity to upzoning was the only consistent variable that could be attributed to any changes in property values, and after using a wide variety of statistical testing, it was found that there was no statistically significant difference between the property values and property value changes for residences surrounding upzoining cases and their neighbors. The study therefore concluded that the practice of upzoning alone is unlikely to cause a rise in the property values of adjacent areas to an upzoned parcel.

However, while the study’s findings were definitive, the research is, like most other related studies, relegated to relevance only in the setting in which it was conducted. However, the findings suggest that upzoning alone is unlikely to cause property values to rise in the suburbs of the American Southeast. It is therefore a culmination of a variety of factors that creates the pricing-out effect of gentrification, rather than a single zoning practice. It is also recommended that local government policymakers who are looking to improve their property values use a variety of tools to do so, as upzoning itself is unlikely to have a dramatic impact (if any at all).

***Note: SP stands for Surrounding Properties (the properties tangential to upzoning cases), NC stand for Neighbor Comparison (the randomly-selected neighbors of the SP). 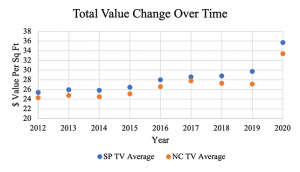 Conor Ryan is a Master’s in Public Administration candidate at UNC-Chapel Hill.

https://ced.sog.unc.edu/2021/09/the-impacts-of-upzoning-on-property-values-in-nc/
Copyright © 2009 to Present School of Government at the University of North Carolina.
Comments are closed.