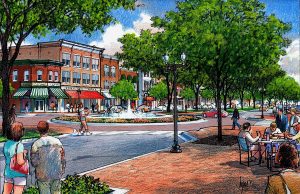 In April 2018, the U.S. Department of Transportation (DOT) officially rebranded their Transportation Investment Generating Economic Recovery (TIGER) grant program to Better Utilizing Investments to Leverage Development (BUILD). Begun in 2009, the TIGER program has provided transportation improvement funding to state and local governments across the country. As of December 2018, $5.6 billion in TIGER grants have been distributed to fund 463 projects across the country.

The TIGER program’s reauthorization as BUILD under the Consolidated Appropriations Act of 2018 represents an important potential funding resource for those interested in community and economic development. According to DOT, the reauthorization made $1.5 billion in funding available through 2020. Individual awards are capped at $25 million, and no one state is eligible to receive more than $150 million. Thirty percent of the total funding must be awarded to rural areas.  The costs and projects that are eligible for TIGER grants will not change under BUILD.  The merit criteria for the BUILD program, however, will now prioritize the local government’s ability to raise revenue for transportation infrastructure.

To understand the potential impact of BUILD grants, it is fitting to examine the impact of the TIGER program. In North Carolina, local governments have effectively used TIGER grants to improve streetscapes, construct and redevelop transportation nodes, and link communities through pedestrian and bicycle-oriented transportation networks.

In 2013, the City of Goldsboro was awarded $10 million for transportation and streetscape improvements along the city’s main Center Street. The project included funding for a new transportation center and hub, street widening, tree installation, sidewalk repair, and bike lane installation. For Downtown Goldsboro, this investment represented a significant revitalization catalyst.

In 2016, a second phase of the streetscape improvements was awarded $5,000,000. The second phase includes plans to extend streetscape along Center Street, construct an expanded concourse at the new Gateway transportation center, and implement a wayfinding program.

The tangible results of the TIGER grant funds are uniquely displayed in Goldsboro. Like many other towns in Eastern North Carolina, Goldsboro has experienced population decline and job losses in recent decades. Once a vibrant urban center, Downtown Goldsboro was left with high vacancy and underutilization. In their 2016 proposal, Goldsboro officials cited the formation of 32 new businesses and 147 new jobs in downtown since the initial 2013 improvements, resulting in over $6.5 million in private investment.

Following an initial planning grant of $850,000 in 2010, the TIGER program awarded the City of Asheville $14.6 million in 2014, allocated for the improvement of multimodal transportation networks along the city’s river front. Known as the River Arts District, the area of the community has witnessed large-scale deindustrialization since the mid 1900s and has flourished as a creative and artistic enclave in more recent years.

Cut off from much of the rest of city since urban renewal, other riverside neighborhoods are home to low- and moderate-income households, including historically African-American communities. Asheville officials saw the TIGER grant funding as an opportunity to create new and reestablish old connections, improving access and potentially correcting some of the mistakes of urban renewal.

Overall, the project will incorporate pedestrian and bicycle friendly design to ease the flow of traffic and promote private development.

TIGER grant funding has been distributed to several communities throughout the state, including Raleigh, Durham, Wilson, Lexington, and others. For community and economic developers, these funding opportunities represent potential mechanisms to revitalize communities and attract private investment.

In both Goldsboro and Asheville, planners recognized the importance of multimodal infrastructure and pedestrian-scale design in their efforts. More than ever, these elements have the potential to fortify a community’s sense of place and encourage new development. For local governments in North Carolina, the funding opportunity provided by the newly reauthorized BUILD program can be leveraged to jumpstart these initiatives.

For more information on the BUILD grant program, DOT has made available a series of webinars and presentations, and instructions on how to apply can be found here. Applications are due in July of each year.

https://ced.sog.unc.edu/2018/12/dot-build-grants-replace-tiger-grants/
Copyright © 2009 to Present School of Government at the University of North Carolina.
Comments are closed.